A baby in a cake?

January 6th, the Feast of the Epiphany, marked the arrival of the Three Kings at the birthplace of Our Savior. The king cake, baked in honor of the Magi, is traced back to several different cultures.

In Latin America a figure representing the Christ Child is placed inside the cake. Other cultures bake a coin, pea, or bean into the cake. In medieval France the finder of the coin was to make a donation to a worthy cause. In other parts of Europe, finding the pea or bean meant you were king or queen for a day.

In New Orleans, where bakeries sell an average of four to five thousand cakes each day during the Carnival season, the person who finds the “baby” has to host the next king cake party.

The cake itself is like a sweet bread, or brioche, decorated with bands of purple, green, and gold colored sugar. Today’s cakes range from the simple iced versions to the extravagant fruit or cream cheese filled varieties. Traditionally served on Epiphany, today the cake is served throughout the “Epiphany season,” or until Mardi Gras. 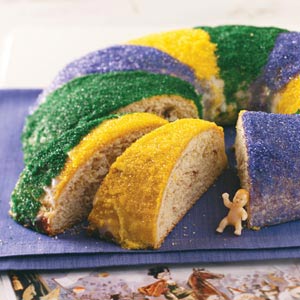 Want to skip the baking?