It never hurts to help.

Max is dancing a variation from Flames of Paris. For this costume we will embellish a white platter tutu and bodice. We previously used this tutu/bodice for Cygnets and Woodland Glade Fairy. The white has proven more practical than I originally thought. For Flames of Paris we need only to add a red, white, and blue sash like the sample shown here. This will be an easy one!

10.3.2009
Finding the right ribbon is harder than we thought. There are lots of patriotic ribbons out there, but most are stiff and not very attractive. I did find a beautiful antique silk ribbon, but it sells for $25/yard. So, the search continues. We may end up sewing three ribbons together to get what we want.

11.24.2009
Finally settled on some ribbon – 4 yards of three colors @ .37/yard. I’m going to double the colors to make it wide enough. The silver edges should give us a nice bit of sparkle against the white tutu.

The tutu itself needs some work so I am now investigating hooping and possibly the addition of a white pleated plate. Also need to add some graduated layers on the back panty.

Since this tutu was not hooped and needs some sprucing up, we purchased a 4-yard roll of tutu hooping from tutu.com for $14. This included shipping. We’ll have lots left over for future projects. The hooping is very nice and is covered with a white canvas.

Before dealing with the hooping I’m adding more layers to the panty of the tutu. I sometimes think it would be easier to start from scratch as this is not as easy as it might seem! I purchased several yards (more than I will need) of white tulle and netting from WalMart for about $10.

Nine graduated ruffles added to the back panty really made a difference.

1.6.2010
On to the hooping! I found the following instructions on 2 different ballet message boards. This was incredibly helpful, but I wondered why no one had photos of the process until I got started. It is impossible to photograph the layers of tulle and net. Just follow these instructions carefully (my changes are in green) and you’ll do just fine.

The Oregon Ballet Theatre blog has a post that includes photos of the tutu making process. This made the directions above so much clearer. Don’t skip it, it’s a fascinating post.

So now we are ready to tack the net-encased, ruflled hoop in place under the already existing layers of the tutu. I will tack along the hips with needle and thread. The rest of the tacking will be done with a fine tag gun. More later! 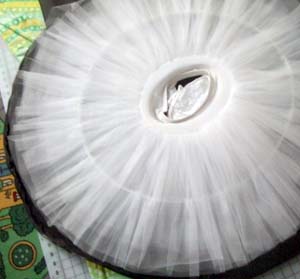 1.8.2010
I ended up just using the tag gun to attach the hoop layer to the other layers near the hips. If you use it horizontally against the fabric, it’s just like a stitch. Finished tutu looks great.

I photographed it against the black tutu bag so you can see the position of the hoop. When on the dancer, the hoop is basically invisible. We’ll see what our dance coach thinks tonight.

1.9.2010
To flatten and stiffen the tutu we left it under a doubled over futon for 24 hours, and got the seal of approval last night from our dance coach. Now we move on to the bodice sash.

1.19.2010
Our tri-color sash is now finished. We decided against the thin ribbons pictured above and went with very nice quality wide satin ribbons for about $9. These were stitched together lengthwise with the seam allowances pressed away from the white center strip. We will run the sash over the shoulder, with a slight gather at the top, and join on the tutu at the front hip.

1.29.2010
Here is our sash, almost finished. The sash is stitched to the bodice at the shoulder and 4 or 5 other strategic points to keep it in place. It also need to be attached to the tutu. We tried a snap on the hip where the sashes come together on the tutu, but the snap pulls open during the dance. For dress rehearsal we simply used the tag gun and tagged the sash at the hip and out onto the tutu. That is our plan for performances as well.

All we have left now is the headpiece!

2.1.2010
For the headpiece I attached several white flowers into a nice asymetrical arrangement. These will sit along one side of the dancer’s bun. The flowers are from Michael’s wedding aisle and cost $3 for a bunch of six. They are velvety, and although you can’t see it in the photo, each flower has a rhinestone center. Our costume is now complete! 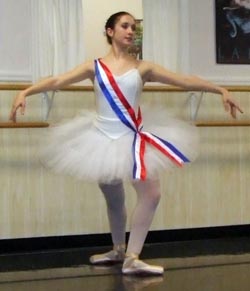 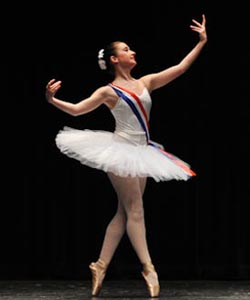 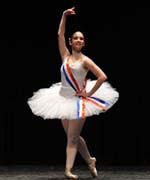 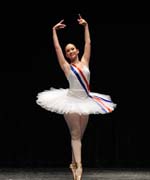 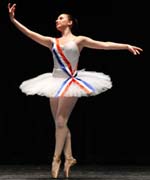