Welcome to Catholic Carnival 217: The Feast of the Annunciation. Observed on March 25, this feast commemorates the announcement of the Incarnation. It is one of the most important feasts of the Church, celebrating the actual moment the Word was made flesh. It is hoped that our words will always serve to glorify the Word and His Blessed Mother.

The Angel of the Lord declared unto Mary. And she conceived by the Holy Ghost.

Indeed, at the Annunciation Mary entrusted herself to God completely, with the “full submission of intellect and will,” manifesting “the obedience of faith” to him who spoke to her through his messenger.

“Obedience of faith” is ever present in the poetry of Rev. John B. Tabb. In honor of Fr. Tabb’s March 22nd birthday, E.L. Core at Blog from the Core gives us seven poems by Fr. Tabb in Tabb Centenary Year XVII.

In Matthew 14:37, Jesus asks us, “Could you not keep watch for one hour?” What does he mean by “watch?” In Looking at Jesus Colleen at Thoughts on Grace reflects on her beautiful silent time with the Lord.

God can be found everywhere, if only you are looking. In Our Lady of the Links, Sarah at Behold Your Mother shares how she’s found God in her golf game.

Lent is a time to pray and reflect upon our faith, a time to seek out the quiet of the desert wherever we are and listen to God through prayer and the scriptures. Catholic Roundup will host a Day of Prayer and Reflection on March 28 for bloggers, podcasters and all Catholics who seek to enrich their faith using new media tools.

Behold, the handmaid of the Lord. Be it done unto me according to thy word.

Mary! – we poor creatures of earth are stumbling over our freedoms, fumbling over our choices. Millions of us are seeking to give up their freedom – some by repudiating it, because of the burden of their guilt – some, by surrendering it to the moods and fashions of the time . . . Teach us, then, that there is no freedom except in doing, out of love, what thou didst do in the Annunciation, namely, saying Yes to what Jesus asks.

Fulton Sheen’s quote is key to the next few posts. In Abstinence-only Education Doesn’t Work, Part II, K T Cat at The Scratching Post continues the arguement that abstnence alone won’t work to prevent out-of-wedlock births in our libertine culture.

Nod, of Wynken, Blynken, and Nod, sees an encouraging trend as the Pope, Archbishop Cardinal George Pell, and the USCCB are all speaking on the same theme from three different corners of the world: the relationship between Liberalism, Intolerance, and Despotism.

Another encouraging trend, seen by Bob at Politickles Blog, is that the Church may at last be Cracking Down on Catholic Charities and its promotion of a leftwing agenda under the false banner of “social justice.”

In It’s Not as if We Weren’t Warned, John at Veritatis: The Cartoon warns of the impending global catastrophe resulting from contraception and abortion.

Pope Benedict was recently quoted: “One cannot overcome the problem with the distribution of condoms. On the contrary, they increase the problem.” In Pope Ignites Condom Debate Christine at A Catholic View focuses on the facts behind his statement.

Marcel at Aggie Catholics deals with this same issue in The Pope and Condoms by answering this question: Is the Pope right in saying that condoms won’t fix the AIDS crisis in Africa or is he just out of touch?

And the Word was made flesh And dwelt among us. 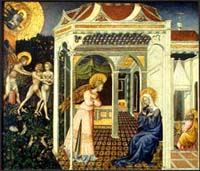 In this Lenten season we often contemplate the Madonna as on Calvary she seals the “yes” she pronounced at Nazareth. United to Christ, the testimony of the Father’s love, Mary lived martyrdom of the soul. Let us call on her intercession with confidence, so that the Church, faithful to her mission, bear courageous witness to God’s love before the whole world.

With a bit of “old rhyming” from J.R.R. Tolkien, Joseph at Ho Kai Paulos explores the path from death to life, from Lent to Easter in The road goes ever on and on.

The hour has come for the Son of Man to be glorified. . . When Jesus is lifted up he will draw everyone to himself. Bob at Prepare for Mass has everything you need to prepare for The FIfth Sunday in Lent.

Mary wasn’t the only person to say “yes” to God. Dietrich, of wombsoflife, parallels priesthood and fatherhood in Aaron and Joseph: Priests to the Womb of the Tent of Meeting.

Victor at Vatican 5000 recently toured the Vatican, St. Peter’s Basilica, and the Sistine Chapel. Obviously, any tour of the Vatican is best in person, but this picture tour of St. Peters Square and Plaza is a great alternative.

Pray for us, O holy Mother of God, That we may be made worthy of the promises of Christ.

The suffering of the mother of Christ continues. The recent Notre Dame decision to present Barack Obama with an award and to have him speak at the school’s Commencement ceremony in May has inspired Jean of Catholic Fire to create a poll. New Poll on Notre Dame Decision raises this question: “Notre Dame President Fr. Jenkins thinks we should honor Obama for his leadership. What do you think?” Post also contains links to related stories on Catholic Fire and many other Catholic blogs.

In this reflection on the Mass readings for the fourth Sunday of Lent (3/22), Kevin at HMS Blog urges us to rejoice in God’s Merciful Grace.

For Sarah at just another day of Catholic pondering the meaning of St. Patrick’s Day lies in what happened eight years ago on The Day Before.

Mothers know that extracurricular activities can be something of a dilemma, and most families have their own unique ways of dealing with these outside activities. Homeschool Goodies wants you to share your approach to the Extracurricular Dilemma!

Thank you for visiting this week’s Catholic Carnival. If you like what you see, I urge you to learn more. Get involved, submit a post or consider hosting!