Carnival, the season of revelry before Mardi Gras, officially began on January 6.

Catholic Carnival 207 is based on the Mardi Gras parades which mark the Carnival season in New Orleans. The season begins on January 6 and ends on Fat Tuesday, the day before Ash Wednesday. This is the last big hurrah before the penitential season of Lent.

Parade themes are usually inspired by great literature, art, history, and culture. Inspired by your posts, the theme for this Catholic Carnival parade is Carpe Deum.

The Captain, masked, and riding a white horse, guides the parade along its route. Join me, your Captain, and 1st time host of the Catholic Carnival, as we begin our parade.

The King waves to his subjects from his elaborately adorned float. 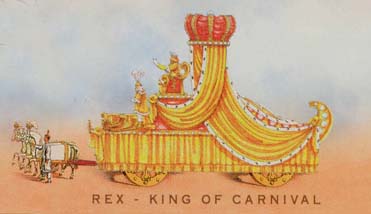 In honor of our King:

Along the route, the King stops to toast his Queen. Let us honor our Queen:

Each float in the parade has a “title” or name based on the theme.

Mardi Gras is filled with pomp and circumstance, as well as Catholic liturgical symbolism. The royal colors of Mardi Gras are purple, green, and gold. The Rex parade selected these official colors in 1872. Purple represents justice; green represents faith; and gold represents power.

Let us be just, faithful, and powerful:

Traditionally one of the first floats in the parade, the boeuf gras, or fatted ox, represents the last meat eaten before our forty day Lenten fast. 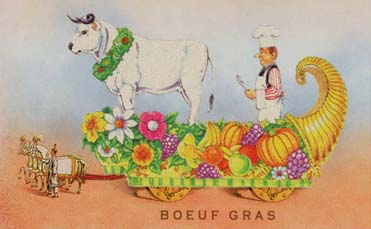 Comedy and Tragedy masks are the Greek symbols of the theater, and since during Carnival time all the world’s a stage, they have been adopted as symbols of Mardi Gras.

At the Catholic Carnival, our stages are our blogs where we share our joys and sorrows:

“Throw me something, Mister!” Float riders began throwing trinkets to the crowds in the 1870s. This tradition still continues. Mardi Gras “throws” include beads, doubloons, cups, and even stuffed animals.

You provided the unique “throws” for this parade:

And just for fun: 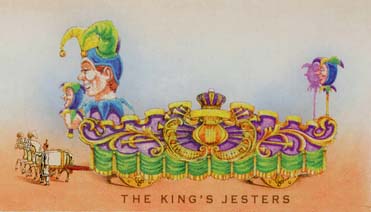